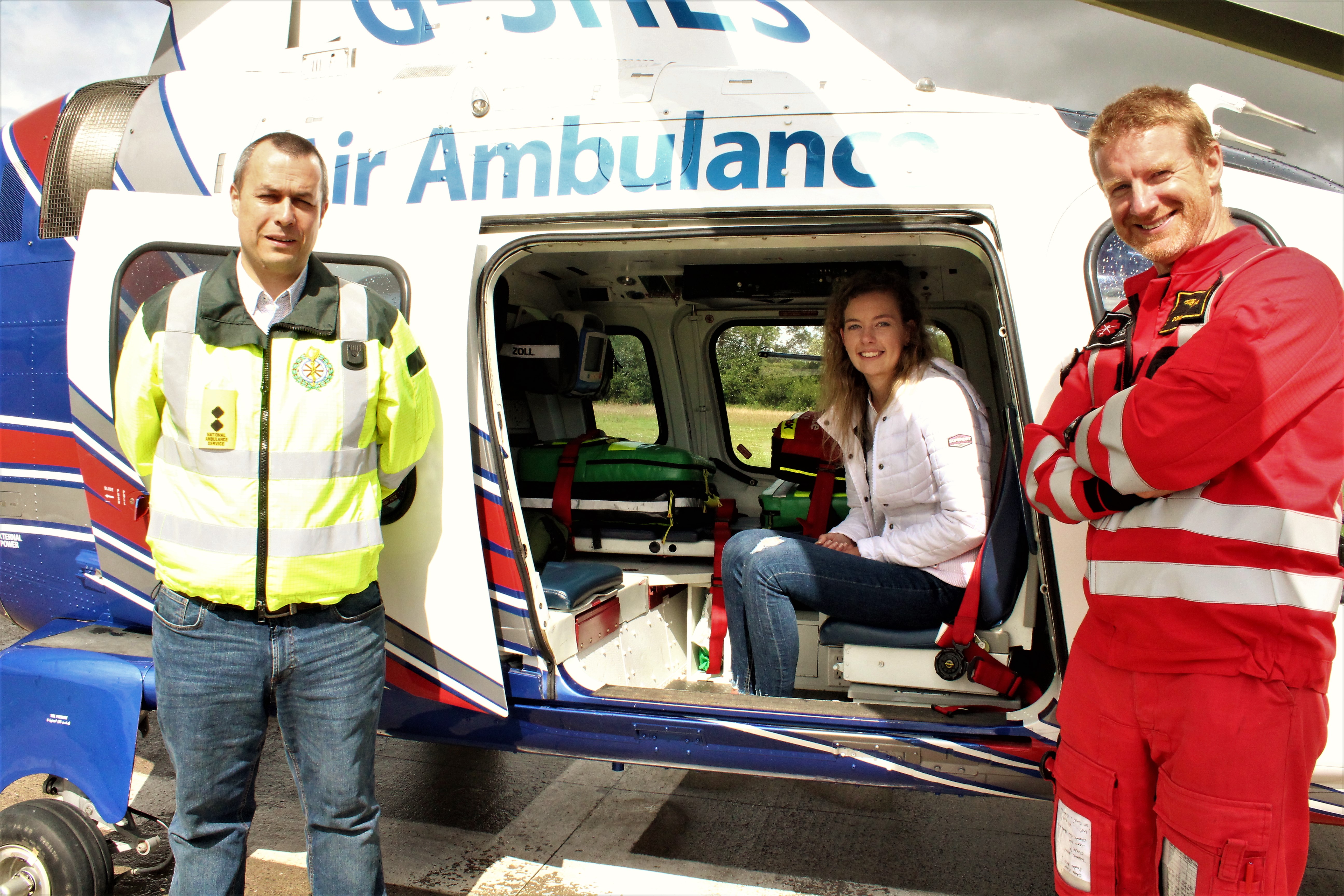 Photo (L-R): Paul Traynor (Lead Paramedic, ICRR), Clodagh Lynch, Donagh Verling (Pilot, ICRR). Caption : Following her recovery, Clodagh Lynch got the opportunity to meet with, and express her thanks to, the lead paramedic and pilot who responded to her medical emergency last May.

In recent years, Carbon Group has made an annual charitable donation to one or more chosen charities at around Christmastime. It’s our way of marking the festive season in lieu of offering Christmas gifts to Carbon Group clients and customers. Of course, there are a multitude of worthy charities that are more than deserving of our support and, most years, it can be difficult to narrow down the list.

However, this year , it was an easier decision than on previous occasions. That’s because one of our Business Development Executives here at Carbon Group has been fundraising for a crucial community service – a voluntary medical emergency service that helped to save his sister’s life.

John Lynch, who has worked with Carbon Group since he graduated from UCC in 2017, launched his fundraising campaign after the Irish Community Rapid Response was involved in bringing his sister, Clodagh, to hospital by air ambulance.

John believes that Irish Community Rapid Response, along with the local Bantry ambulance service, are to thank for the fact that Clodagh is still with us today and preparing to enjoy a low-key Christmas at home with her family.

Clodagh was revived by defibrillator after 45 minutes and was taken to Cork University Hospital by the air ambulance for further emergency treatment in CUH’s intensive care unit.

“Getting my sister to CUH from the family home more than 80 km away from Cork city and admitted into intensive care was absolutely vital”, explains John.

“Without the assistance and intervention of both the local ambulance service and the ICRR helicopter, we would not be looking forward to enjoying a family Christmas at home with Clodagh this year. Thankfully, after 6 weeks in Cork University Hospital, Clodagh came home to West Cork and has recovered well”.

Having no prior knowledge until last summer about the services provided by the ICRR, John says he was keen to spread the word and join the fundraising effort:

“The Irish Community Rapid Response provides outstanding emergency care through a network of volunteer doctors, along with rapid response vehicles and a dedicated emergency helicopter service. It’s hard to believe that ICRR are not government funded; they rely on donations from the public to remain in operation. It’s an invaluable and life-saving service that’s incredibly important for the people of rural Ireland and we’ll forever be grateful for what they’ve done for Clodagh”. 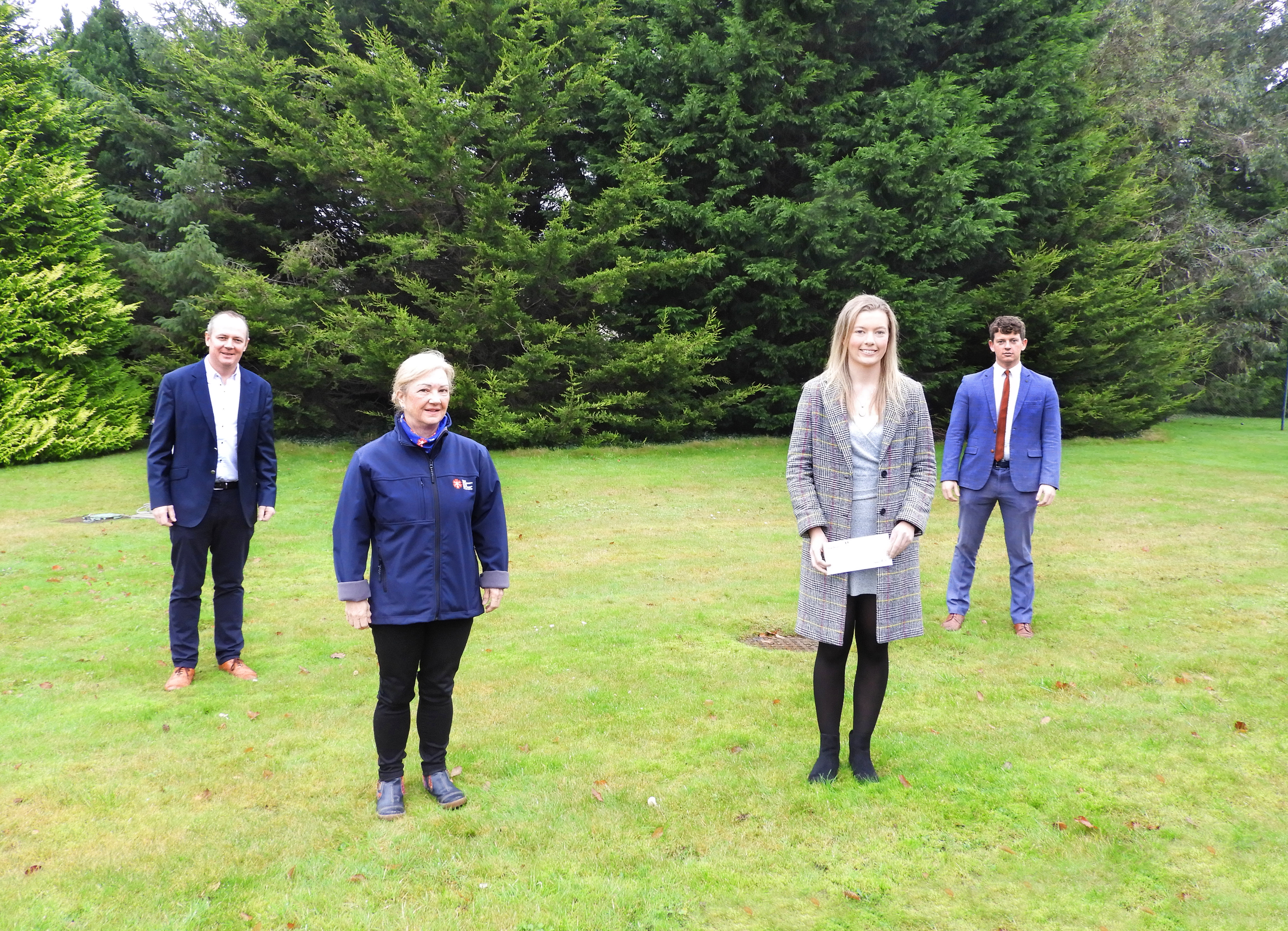 Along with other family members, John has been fundraising for the ICRR via a social media campaign. He says he’s delighted that Carbon Group has supported the fundraising effort this Christmas by selecting Irish Community Rapid Response as the company’s chosen Christmas charity.

“For anyone living in a remote area, it’s truly frightening to think of the consequences of not getting to hospital in time. Whether it’s a road traffic accident, a cardiac arrest, a stroke or any other type of medical emergency, it’s unthinkable that there might be a delay transferring someone to a major hospital in an emergency situation. Hearing first–hand from John how ICRR responded to his sister’s sudden cardiac arrest has made everyone here in Carbon Group more aware of the extreme importance of a community-based service like this. We’re delighted to be able to support Irish Community Rapid Response this year and we look forward to keeping up to date with the charity as they continue efforts to expand their service”.

Since 2008, ICRR has been developing a register of volunteer doctors throughout Ireland. The volunteer doctors are tasked via 999/112 call dispatchers at the National Emergency Operations Centre, and when available, they attend serious, life-threatening emergencies in their own locality. This access to medical care, well within ‘the golden hour’, often means the difference between life and death.

Working in partnership with the UCD Centre for Emergency Medical Science (UCD CEMS), ICRR has enlisted over 235 volunteer doctors to date. Over the next few years, ICRR aims to increase the number of volunteer doctors signed up for voluntary service throughout the country to nearly 500. In line with this expansion, ICRR aims to increase its fleet of rapid response vehicles.

Listen to Clodagh Lynch speak about her medical emergency and ICRR’s role in bringing her to hospital – RTÉ Radio 1 Drivetime.

You can find out more about which cookies we are using or switch them off in settings.

This website uses cookies so that we can provide you with the best user experience possible. Cookie information is stored in your browser and performs functions such as recognising you when you return to our website and helping our team to understand which sections of the website you find most interesting and useful.

Strictly Necessary Cookies should be enabled at all times so that we can save your preferences for cookie settings.

This website uses Google Analytics and Google Tag Manager to collect anonymous information such as the number of visitors to the site and the most popular pages.

Please enable Strictly Necessary Cookies first so that we can save your preferences!

You can change these settings anytime by visiting the homepage and scrolling to the bottom of the page and by clicking on Cookie Settings.